We hope you love the products we recommend! Just so you know, Steammopswork may collect a share of sales or other compensation from the links on this page. Oh, and FYI — prices are accurate and items in stock as of time of publication. Read the full disclosure here 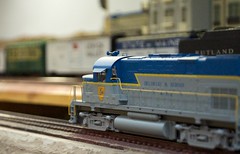 If you find yourself interested in model trains, you may be surprised to find out that there are those who actually consider a serious endeavor to build model trains that are exact replicas of real trains of the olden years. Trains come with a long history since for centuries it was the only modern means of transportation. During those times, there were cars which were known as train compartments then and there were private coaches intended for the rich and famous while the ordinary folks rode the trains. In many places on earth, the trains’ arrival was used to determine time instead of the other way around which only shows that at one time in the past trains were considered reliable mode of transport.

If you desire to engage in the hobby of collecting model trains, then you may as well start with the N Gauge trains which are smaller than the HO and O scale trains. N Gauge trains are truly designed for those who are beginner hobbyists especially those that don’t have much space at home. N Gauge trains will allow you to have intricate train set-ups even with limited space. As a matter of fact, you may be able to set up already a complicated and intricate N gauge set of connections in an eight feet long and four feet wide space. N by the way stands for nine which is that distance in millimeters between rails found on the tracks the trains roll on.

N trains are not as popular as the large scale trains but it is the most popular in its scale level and that makes it more available and its parts easy to find and purchase. But don’t get fooled by its size. N Gauge trains are as detailed as the larger trains are and to pick them for your start-up hobby will not be a bad idea at all. Being that N Gauge trains are smaller you are able to create longer attachments especially because they are lightweight by nature.

The most famous brands for trains and accessories are the Lionel and Bachman and it’s easy to spot N Gauge trains through these makers and as a matter of fact the two brands have really mean starter kits like the Bachman Prairie Flyer Set. As a set, it is almost complete with an old fashioned combine, coach cars, the 4-4-0 steam locomotive and its EZ track for a 34 inch by 24 inch oval and the best thing about this is that you can have it for less than 100 dollars.

N Gauge trains also have available sceneries and other accessories to complete the entire train railway like trees, plants, people, birds and even those life-like amenities. You can have many scenery choices and you can find them all at the nearby local stores and also through the Internet.

Find out more about N Gauge Trains by checking on Model Trains Info.